By Toronto News on June 9, 2020Comments Off on Chesapeake Energy shares halted after 50% plunge on bankruptcy report 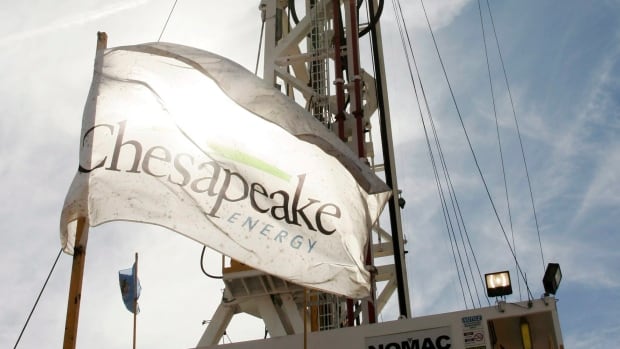 Shares in one of the biggest natural gas companies in the U.S. were halted on Tuesday after plunging by half on a report the company could be about to go bankrupt.

Financial news agency Bloomberg first reported that Chesapeake Energy is considering an arrangement whereby some of its biggest creditors would take control of the company, potentially wiping out shareholders in the process.

The move would be a shocking turn of events for a company that once rivalled Exxon in terms of its influence in the U.S. energy sector. The Oklahoma-based company was founded in 1989, and became a pioneer in fracking, a controversial process of injecting pressurized water and chemicals into previously unobtainable natural gas reservoirs in order to extract them.

At its peak, the company was one of the most influential energy companies in the U.S., but it has been hit hard recently amid declining energy prices and COVID-19.

The company was trying to pivot from natural gas to a greater emphasis on oil when a Saudi-Russian energy price war earlier this year upended those plans and the oil market as a whole.

But the company’s main problem is its debt load, which it accumulated during an aggressive pace of acquisitions.

The company owes almost $ 9 billion — more than ten times the company’s current value. The bankruptcy plan is seemingly those lenders taking over the company in order to get as much of their money back as they can.

Chesapeake’s shares nearly tripled on Monday under extremely heavy trading in what was likely a short squeeze — a sudden move higher for stocks investors are betting heavily against. About 20 per cent of Chesapeake’s shareholders are shorting the stock right now, according to financial data firm Fintel.

Watch the video below for an explainer of what short selling is, and how it works:

An animated explanation of how people make money from stocks losing value 0:46

The stock was halted 22 times due to the volatility.

After markets closed on Monday, the Bloomberg report of bankruptcy plans sent investors running for the exits.

Chesapeake shares were changing hands at $ 32.25 on the NYSE on Tuesday, down 54 per cent from Monday’s level. Trading in the shares were halted another 14 times on Wednesday. At current prices, the company is worth about $ 700 million, a fraction of the almost $ 40 billion it was worth more than a decade ago.

In April the company implemented a 200-for-1 stock consolidation in an attempt to stop its shares from being delisted from the stock exchange. In May it warned that bankruptcy was possible, telling investors as it withdrew its financial guidance that it was “working with its financial and legal advisors to best position Chesapeake for the future, including analyzing all available strategic alternatives to address its capital structure and improve its financial position.”

Chesapeake had about 2,300 employees at the end of last year, before announcing a 13 per cent cut to its workforce in April.