Ontario reported another 1,575 cases of COVID-19 on Thursday, a third straight record-high day for the province.

The new cases push the seven-day average of daily cases to 1,299, the highest it has been since the first confirmed case of the illness was reported in Ontario in late January. The curve has continued on a steep upward trajectory in the last week.

Other public health units that saw double-digit increases include:

There are 103 school-related cases in today’s report, including 51 students, 14 staff and 38 people who are not identified. A total of 653, or about 13.5 per cent, of Ontario’s 4,828 publicly-funded schools have reported at least one infection since the academic year began, and one school is currently closed because of COVID-19.

The new record-high number of cases were confirmed with 39,559 tests for the novel coronavirus. The province is reporting a test positivity rate of 4.3 per cent, down from yesterday’s 5.1 per cent.

At the province’s daily news conference Thursday, Premier Doug Ford said the numbers are “going in the wrong direction. 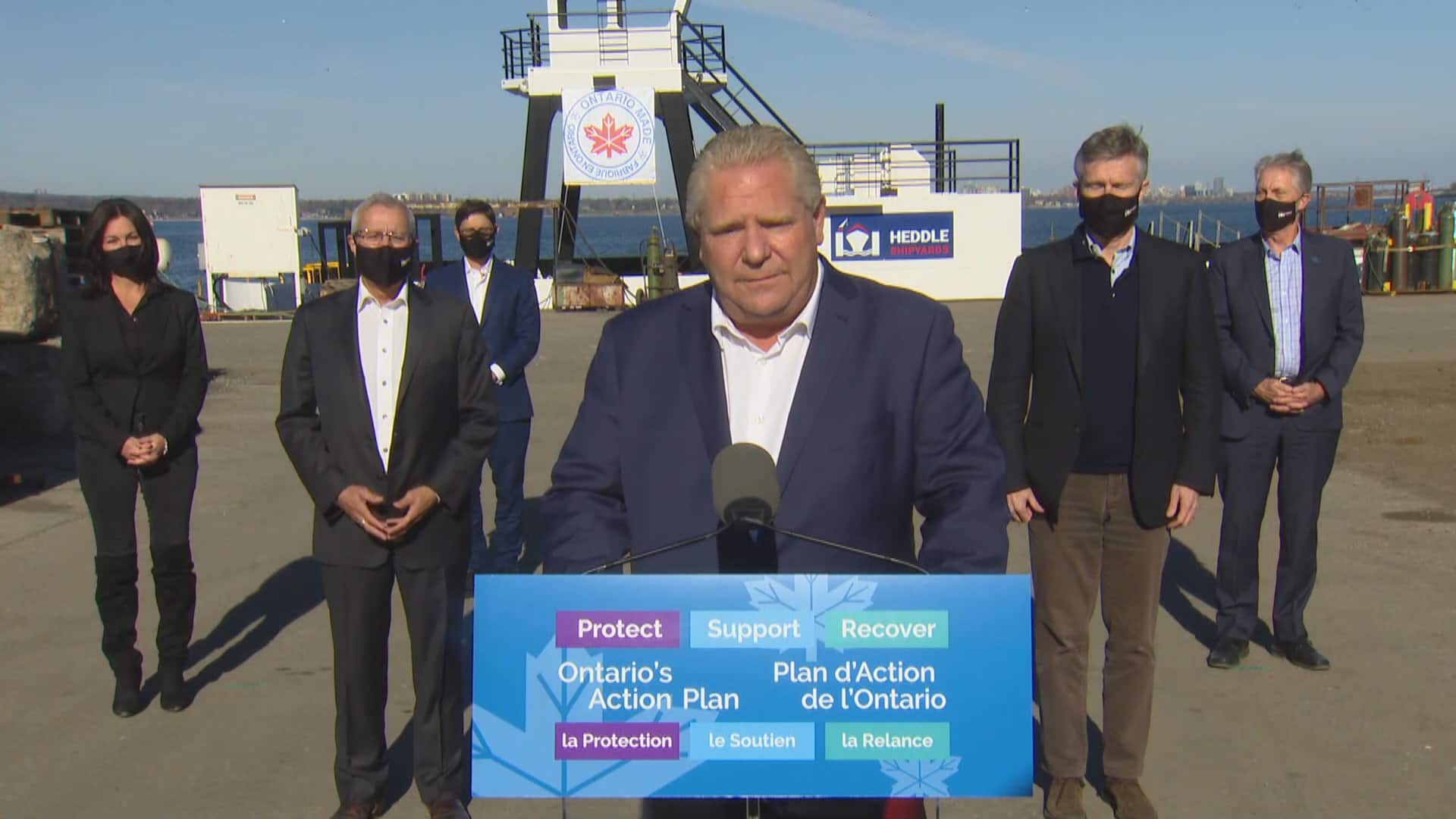 Premier Doug Ford responds to a report by the Toronto Star that suggests Public Health Ontario recommended setting several key thresholds for the red “control” tier — the most stringent set of restrictions before a full lockdown — at levels four times lower than those the government ultimately chose.   1:35

Ontario’s official COVID-19-linked death toll grew by 18 and is now 3,293. About 64 per cent of those deaths were residents in long-term care.

There are ongoing outbreaks of the illness in 94 long-term care facilities, with 695 active cases among residents and 435
among staff.

[Note: All of the figures used in this story are found in the Ministry of Health’s daily update, which includes data from up until 4 p.m. the previous day. The number of cases for any particular region on a given day may differ from what is reported by the local public health unit, which often avoid lag times in the provincial system.]

The figures come after a blockbuster news report that the government rejected advice from its own public health agency when it developed the new tiered, colour-coded framework for imposing COVID-19 restrictions.

The Toronto Star reported late Wednesday that Public Health Ontario recommended setting several key thresholds for the red “control” tier — the most stringent set of restrictions before a full lockdown — at levels four times lower than those the government ultimately chose.

Dr. Shelley Deeks, chief health protection officer at the agency, told the newspaper she only found out about the government’s decision when the framework was unveiled publicly last week.

“I’m not in agreement with the indicators as they are currently written in the framework,” Deeks told the Star.

Deeks declined to speak with CBC News today, but a spokesperson for Public Health Ontario said the agency stands behind her comments.

Further, the co-chair of the Ontario COVID-19 modelling consensus table said her group was not consulted at all on the guidelines, despite Minister of Health Christine Elliott suggesting it had at a news conference.

Experts outside of the government’s advisory tables have also expressed concerns that the thresholds in the new framework are too high.

“That is one doctor’s perspective that sits on the disease prevention table,” Ford said.

The premier also said the province is doing everything it can to avoid a “complete lockdown.” He and other provincial and regional officials spent nearly 22 minutes speaking at the start of the province’s press conference, but they almost exclusively talked about Ontario’s economic picture.

“The easy thing to do is just sit back and say, ‘Let’s just shut down the whole province. How do you deal with the mental health of people?'” Ford asked.

“Everyone has their opinion. The fact is … Dr. Williams came to us with a framework. The cabinet approved the framework.”

In an email, a spokesperson for the Ministry of Health noted that Williams, as well as local medical officers of health and members of the public health measures table all had input when the tiered system was developed.

“The framework was also informed by data, evidence, and information, including from other jurisdictions, and approved by cabinet,” the statement said.

“As per the framework, local context and conditions are also critical to informing its implementation, including potential regional application of measures. It takes into consideration several determinants of health including mental health, job loss and overall livelihoods of the people of Ontario,” it continued.

Peel Region is currently the only public health unit in the red “control” tier of Ontario’s new colour-coded COVID-19 restrictions framework. Toronto, which was initially set to roll into the less stringent orange “restrict” tier, will instead join Peel in the red as of Saturday.

Local officials in both health units also implemented further limitations above and beyond what is outlined the province’s system.

In a statement issued this morning, the Ontario Medical Association (OMA) said front-line doctors agree there should be a framework but the government’s current one is “too lax and allows too many businesses to remain open even when many people in their communities have the virus.”

It goes on to say that the thresholds for moving from tier to tier should be “much lower, in some cases 50 per cent lower” and that any regions in the orange “restrict” and red “control” categories should close all bars and prohibit indoor dining.

“Doctors are worried. It is clear the new tiered framework is not enough to control the virus, which is spreading among more and more people,” said Dr. Samantha Hill, president of the OMA.

The Star report is expected to dominate Premier Doug Ford’s 1 p.m. appearance in Hamilton, and it has garnered stinging reaction from opposition parties.

At a morning news conference, NDP Leader Andrea Horwath called for a two-week, “circuit-breaker” shutdown that would put hot spots into a modified version of the province’s original Stage 1 phase, or a state of semi-lockdown.

The closure would need to come with significant financial supports for businesses and people, Horwath added.

She went on to accuse Ford and Elliott of lying to the public about how the new framework was crafted, and said the province is “heading toward a public health and economic catastrophe.”

For his part, Liberal Leader Steven Del Duca said in a statement that Ford should replace his “confused medical plan with the plan that doctors recommended.”

The new projections for how the virus might spread in Ontario come as the province has reported daily case increases above 1,000 for the past week.