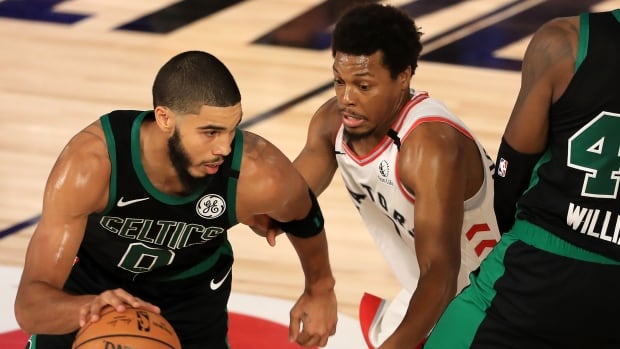 The Toronto Raptors had packed with a plan of being in Florida for four months. They’re now just two losses away from leaving the NBA bubble.

The defending NBA champions let Tuesday’s game slip away in a woeful fourth quarter Tuesday, and now trail the Boston Celtics — a team that has had the Raptors’ number all season long — 2-0 in their best-of-seven Eastern Conference semifinals.

Jayson Tatum scored 34 points while Marcus Smart made five three-pointers in a sizzling three-minute stretch to start the fourth quarter, and the Celtics edged the Raptors 102-99.

The Raptors at least can draw on experience. They trailed Milwaukee 2-0 in the conference finals last season before winning four straight to book their spot in the Finals — although last year’s Finals MVP Kawhi Leonard was in the lineup.

“We’re pretty pissed right now we’re down 0-2, but we have to go back and look at the film and understand what we’ve done wrong and what we can do better,” said Kyle Lowry, who had 16 points on the night.

“This is not a situation we’d like to be in but it’s not a normal situation in the playoffs where we lost two home games. We just lost two games.”

OG Anunoby scored a post-season career-high 20 points for the Raptors, who went 11-0 against other opponents in the NBA’s restart at Walt Disney World, but have now lost three in a row to Boston and are 1-5 against the Celtics this season. Fred VanVleet added 19 points, while Serge Ibaka and Pascal Siakam had 17 points apiece.

The Boston Celtics take a 2-0 series lead over the Toronto Raptors with a 102-99 victory thanks to late-game contributions from Marcus Smart and Kemba Walker. 0:56

“I think we should know we shouldn’t give up,” coach Nick Nurse said on lessons learned last season. “We know the next game is super critical but they’re all critical, they are. But we know this one’s super critical.”

After the Celtics led wire to wire to clobber Toronto 112-94 in Game 1, the Raptors came out with greater energy Tuesday and Marc Gasol’s basket to put Toronto up just 47 seconds in marked the Raptors’ first lead against Boston in nearly 97 minutes over their two previous games.

The lead changed hands 16 times before the Raptors finally put some separation on Boston in the third quarter, and then with 2:46 left of the frame, Nurse won a big challenge on a call after Smart sideswiped Siakam. Siakam’s free throw after the call reversal capped an 11-0 Raptors run and put them up by 12.

Toronto took a 78-70 lead into the fourth, but the Raptors’ momentum ground to a halt. Smart lit it up with five consecutive three-pointers to start the quarter, and his fifth long bomb, barely four minutes into the period, put Boston up by a point.

How disheartening was Smart’s hot hand for Toronto?

“It sucks. He made five shots, he’s a pro, he got hot and we didn’t cool him off,” Lowry said.

‘We’ve got to win the next game’

The Raptors gained some life in the dying minutes with five straight points, and when Lowry drew a foul and connected on two free throws with 1:01 to play, it sliced the difference to just a point. Kemba Walker replied with a jumper and then Siakam stepped out of bounds on Toronto’s possession — a hazard in the bubble with no sideline fans. VanVleet missed on a desperation three-pointer at the buzzer to seal Boston’s victory.

Boston hit seven three-pointers in the fourth quarter, while the Raptors went just 1-for-11 from distance over the final 12 minutes.

Toronto never got to the line in the first half — a first for the Raptors in any game since a playoff matchup with Cleveland on May 23, 2016.

After a roller-coaster week in the bubble around racial unrest and the league’s three-day shutdown, Tuesday marked the first game with players’ families in attendance. Video of VanVleet greeting his two kids — daughter Sanaa, who’s two, and Fred Jr., who was born during last year’s conference finals — went viral on Monday. The guard hadn’t seen them since July 21.

NBA players have been separated from their families while competing during the pandemic. Families began arriving in the Orlando area last week and went into quarantine before being permitted into the league bubble. 0:32

The camera caught Sanaa courtside during a timeout on Tuesday, waving and saying “I love you daddy.” VanVleet hit a three-pointer on Toronto’s next possession.

Nurse, who doesn’t have his young family with him in the bubble, hoped the arrival of loved ones would help the players.

“When you’ve got small children, you know how much they can change when you haven’t seen them for a five-day road trip, let alone a two-week road trip, let alone a couple month sabbatical here that we’re on,” Nurse said in his pre-game availability. “So I think that there was a lot of … amazement [in Monday’s family reunions].”

The cheering of real fans in the gym however wasn’t quite enough to push Toronto past the Celtics in Game 2.

VanVleet led the way with nine points in the first quarter, and his driving hook shot had the Raptors up by eight midway through the frame. The quarter ended in a 28-28 tie.

The teams matched each other virtually shot for shot through the second quarter until a driving dunk from Robert Williams had the Celtics up by five late in the half. Siakam connected on a desperation three-pointer at the buzzer and the Raptors trailed 50-48 at halftime.